How to recognize a healthy Discus

Text and photos by Rosario Curcio

Have you decided to raise the KING of the aquarium? Excellent, a significant choice, beautiful and  quite demanding. Has the tank been ready for over a month? Is it big enough? Perfect, so we’re ready to purchase our first Discus. You’re now at your trusted breeder, specialized pet shop or “aquarist” looking over a tank full of dozens specimen in front of you. What do you do? Which one do you choose? First, put aside taste and concentrate on the “body language” of our favorite fish. Therefore, arm yourself with a lot of patience and an observatory spirit.

The following checklist relates to, summarized in broad terms, the different parts of the body that should be examined closely before selecting a specimen or two to take home. Its essential to invest a great deal of time observing (visually) the Discus in the aquarist’s tank before purchasing. Its good practice not to take this step for granted; because a fish’s health that is borderline, or actually sick, will be difficult for “amateur” acquariophile to nurse back to health. Not because they are not knowledgeable about the illness, therapy or medicines (if necessary), but above all because care is difficult. Almost always these illnesses are analyzed using deduction and never accompanied by histological analysis carried out by material experts. Therefore, more than ever it is fundamental to observe the following rule:

Prevention is better than curing…much better.


Its important that before tackling in detail the various situations, lets introduce the general health concept, which is firmly related to the exterior appearance. A healthy Discus should always be lively, should have their fins open, and curious about what’s going on inside the tank and… outside. It’s attention towards the exterior is a good sign. Of course, we’re talking about a “shy” fish so its curiosity will not ever be comparable with that of a carp, as an example. Lonely Discus, with dark and gathered fins already have problems. The colors should be brilliant. They should be hungry. A healthy fish is chronically hungry. Ask the aquarist to come over and feed them (often they are given frozen chironomids: a  delicacy…  best in flakes or granules).  The feces: its best to wait for defecation to take place.  The excrement should be dark in color, average a centimeter in length, be of a certain consistency and compact. Long, white and filamentous feces denotes the presence of a ponderous of intestinal worms and flagellates. Resulting abdomen should be round; a drawn or obvious concave abdomen denotes physical deterioration and inadequate nutrition. The shape pointedly should be as round as possible, an elongated fish has surely suffered during a development phase. Ask… the first question that should be asked of an aquarist: how long have they been in the tank and where did they come from. 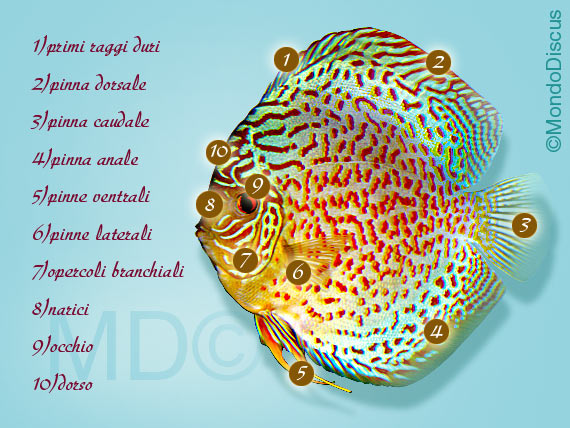 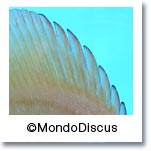 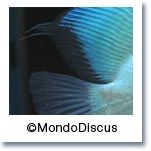 2) Dorsal Fin: this is recognizably the majestic fin of any fish, meaning that when the dorsal is well developed, in a rounded shape, open, colorful and broad, one could even say that it possesses a regal demeanor.  A tranquil and healthy discus, for the behavioral parade, utilizes all the fins at its disposal, that is because a specimen with open fins is a beautiful sight to see. Lonely specimens with enclosed fins or gathered and lacking edges, contracted or with an uneven borders are to be evaluated closely or excluded all together as a possible choice.  These anomalies often point at bacterial infections and drastic changes in pH levels. 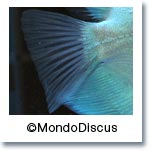 3) Caudal Fin: is the measurable “yes/no”, meaning that some authors tend to measure the fish’s length including the caudal fin, while others exclude it. Aside from this secondary aspect, the caudal fin should be perfectly inline with the backbone. A cascading caudal fin or one that points towards the side is attributed to a backbone deformation (incurred during the post larvae growth). Also for the caudal fin it’s worth referring back to what was previously said of the dorsal fin. Definitely, very important–the magnitude and shape. Well formed caudal fins, in equilateral triangular shape with rounded edges, give the fish a harmonious physiognomy and… royalty. 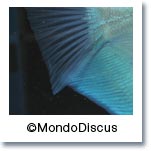 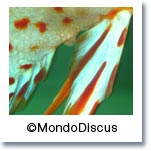 5) Ventral Fins: are positioned exactly at the height of the abdomen and are symmetrical with the central body line. They should not be short unless these are on a young discus, obviously. They should have a triangular shape and be low hanging. Similar to a quill with a slight curve towards the tail. Their length should be in harmony with the rest of the body. Excessively long fins or multiple (more pointed extremity) denotes possible hormonal treatments. The colors should be brilliant and while weak worn or  whiteness on the extremities should not be present. This is a symptom of a bacterial attack on the body. Every so often, a case presents itself with this problem, correcting the pH value is optimal and maintaining the greater hygiene in the whole tank. The ventral fins have a tendency to re-grow. 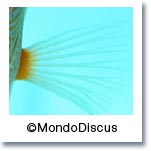 6) Lateral Fins: are the fins that our finned friend uses to turn and push… to move itself freely in all directions. These fins are important, not to be ignored.. like all the others obviously. These fins are also called “even” because there are two, like the ventral. While all the others are called “odd”, as in single. Pay close attention that these are rather transparent, open and well developed, not pudgy and they should be well attached to the body. They’re in constant movement and are essential to the general equilibrium of the fish. Fraying and corroded extremities, white or cottony spherical protuberances are indications of bacterial attack, drastic changes to the pH level and of inadequate water hygiene. Ascertain that there are no evident corrosions in action. 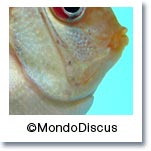 7) Gills: an important aspect of health are undoubtedly the gills. These should be beautiful and perfectly formed. Operculum, the bony cover for the gill, that are closed, raised, short or dangling cottony threads, indicate that certain flaws were caused by a variety of deficiencies: vitamins, minerals, oxygen and non-optimal general water conditions… excessive pollution. A fundamental organ for respiration, the gills should move contemporaneously (careful that they are not stuck together) following the movement evenly to about 60-80 openings and closures per minute. Accelerated breathing could be attribute to different factors, the three most indicative are: pH level, temperature and organic pollution. 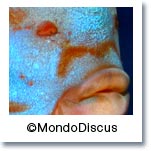 8) Nostrils: the nostrils should be the same size and one should not be smaller and the other bigger. This particularity could indicate a bacterial problem without any easy solution. Ascertain that there are only two holes present, positioned immediately over the mouth, otherwise we have a specimen that has had vitamin problems that are evidenced by the famous “holes” on this section of the head. Even the mouth should be pink and fleshy as its breathing from 60 to 80 movements. Obviously accelerated breathing is a signal related to mood, overeating, pH changes, lack of oxygen or even bad hygienic conditions. 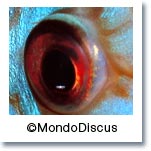 9) Eyes: these should be bright and intense, the pupils should stand out, as long as it not about “Albino” selections. At a glance they should appear lively, transparent and without inner rings or spots. A sluggish, dull, veiled or dark eye, could hide diverse diagnosis, like worm infestations or abrasions from rubbing or even pH changes. Additionally, eyes that are too big with respect to the rest of the body, are evidence of inadequate growth especially during the first phase of life. The subject in question surely has suffered delays in growth. Be careful that the two eyes, are the same size, because specimens have been introduced with a bigger eye and the other smaller. 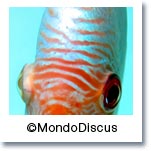 10) Dorsal: a very important part to contain the “eye.” In fact a healthy discus should be looked at head on, should present a beautiful rounded forehead and fleshy with a certain thickness, up to 3 cm. On the other hand, a lean dorsal or shaped like a “knife’s edge” is a sure indication of sickness underway or  regressed. Fish with a lean dorsal are not recommended because they are specimens that have suffered greatly. Malnutrition, almost surely suffered from intestinal parasites, flagellates or others… in any case its best to give it up because its not healthy. 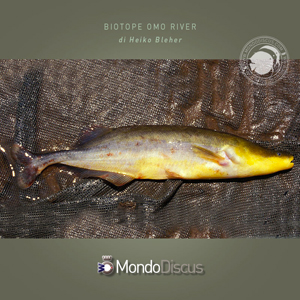